KANSAS CITY, Mo. — Whether you’re looking for a scare or want to admire some history, Kansas City and the surrounding area is full of haunted places to visit. Halloween is just around the corner. Also, some of these sites are great if you’re looking for a nice spot to take pictures for autumn.

Make sure if you visit any of these places, you follow the guidelines set up by them and go during operation hours. Some places are private and off limits.

The Hotel Savoy in Kansas City has provided people with a place to stay since 1888. The old Savoy Hotel at 9th and Central streets has undergone a $50 million transformation and has reopened as the 21 c Museum Hotel Kansas City with modern art. The location is two miles away from Union Station and Boulevard Brewing Company.

As assortment of paranormal activity has been reported at the site for more than 100 years.

Some people say it is home to a ghost of a little girl in a Victorian outfit, and a ghost of a man whose apartment used to be there.

One of the oldest homes in Kansas City is also considered one of the most haunted: the John Wornall House. It is rich with civil war history. There are tales of spirits wandering outside the home that vanish suddenly. The rumors are thick: people have reported seeing armed soldiers from the Civil War era patrolling the balconies and doors there.

People have claimed the smell of pipe tobacco lingers, as well as noises, voices, and a strange rocking chair in the children’s bedroom.

The museum, located at 6115 Wornall Road in the Brookside area of Kansas City has lavish furniture that would fit a pre-Civil War family.

John Wornall built the house in 1858.  It is one of four remaining Civil War period homes in the Kansas City area.

During the Civil War, the Wornalls’ home was used as a hospital for both Union and Confederate soldiers following the Battle of Westport. 361 Union fighters and 510 Confederate fighters died in the battle. The battle is sometimes referred to as the “Gettysburg of the West.” It was fought on October 23, 1864. Union forces won the battle.

The battle was the last major Confederate offensive west of the Mississippi River.

In 1900, the Odd Fellows Home District was established along with the Belvoir Winery. The Odd Fellows Home District came with multiple buildings, each with an individualized purpose including: a home for the elderly, a hospital, and a school. A cemetery nearby is the final resting place of some 600 people. The Belvoir Winery is now open for wine tastings, weddings, and other private events.

Visitors at the winery sometimes say they spot another crowd that doesn’t seem to fit with everyone else – perhaps ghosts of an old woman singing and a mischievous man. There are reports of children on the property playing, singing, and just creeping people out.

And perhaps a piano there plays of its own accord to open listeners.

Back in 2013, Belvoir Winery was featured on the Sci-Fi show “Ghost Hunters.”

Children used to learn at the top floor when the building was an orphanage.

Northeast of Kansas City, the historic Elms Hotel and Spa still delights patrons. A fire damaged it in the late 1800s. The Hotel was rebuilt between 1909 and 1912.

A number of Kansas City’s and the nation’s most notorious gangsters visited the site in the 1930s including Charles “Pretty Boy” Floyd, Al Capone, and George “Bugs” Moran. There are stories that the mobsters would enjoy gambling and alcohol in the hotel basement.

Staff and guests have reported ghost sightings for years. In particular, a maid ghost from around the 1920s who appears to look after the cleaning staff.

People claiming to see ghosts report the more bizarre sightings are down in the basement.

The hotel also serves as a wedding venue. The hotel space recently had a $20-million renovation.

Uriah Epperson and his family lived in the house back in 1920. It is said to have some curious paranormal activity – from footsteps, organ music, and other unexpected sounds. It is home to a possible ghost – a woman in an evening gown who likes to wander. People claim she is the adopted daughter of the Epperson family. Harriet Barse is said to have died during construction on an organ installation in the house. Barse died on December 20, 1922, of a perforated gall bladder.

The house is now part of the University of Missouri–Kansas City.

Epperson was a banker, industrialist, and philanthropist. He had significant wealth from insurance and meat-packing industries.

Uriah Epperson died in 1927, only four years after completion on the house. His widow donated the building to the university in 1942. It was used as a men’s dormitory until 1956.

Coates Hotel has a long history. It opened in 1867.

U.S. Presidents Theodore Roosevelt, William McKinley, and Grover Cleveland all stayed there. A century after it opened, it turned into a homeless shelter. A fire broke out in 1978, killing 20 homeless people there.

Years later the building was repaired and turned into a large apartment complex. Residents have complained of seeing strange shadowy figures around the building and appliances having a mind of their own.

One of Kansas City’s most historic churches makes the most haunted list. St. Mary’s Episcopal Church was built in 1857. There are rumors that odd sounds and activity in the church are caused by Father Henry David Jardine who died in 1886. Some say he is making these sounds to clear his name of any wrong doing.

The hotel opened in 1916 and was a stopping point for several big names including: The Beatles, Elvis Presley, and all the Presidents in office from Theodore Roosevelt to Ronald Reagan. It appears Theodore Roosevelt really had a thing for KC hotels since this is the 3rd time in this article his name has been mentioned.

The Muehlebach is in operation as part of the Kansas City Marriot.

Rumors have it the hotel is home to “The Blue Lady.” Many people believe she used to be an actress in the 1920s and is in search of her lover.

One of the most notorious haunted places in the nation is in St. Joseph. It used to be known as “Missouri State Lunatic asylum Number 2.” There are 2,000 confirmed deaths at this site. According to hauntedplaces.org, the Glore Psychiatric Museum is haunted by deceased patients. People who have visited here say they have heard a woman’s voice asking for help, whimpering, and crying. Others have reported a vision of a man running along the basement hallway and shouting, “Why are you here? Get out!”

The morgue at the Glore Psychiatric Museum is no longer in use. There are a number of interesting artifacts at the museum that are creepy enough without ghosts. More than 1,000 metal objects were removed from a patient’s stomach in 1929. Those objects are now on display. It includes pins, nails, tacks, and other items.

Located between Lawrence and Topeka in the town of Stull, Kansas — the Stull Cemetery has a deeply haunted reputation. Rumors started in the 1970s that the cemetery is one of the Seven Gateways to Hell. There is another urban legend that started about the same time: that Satan appears in Stull Cemetery on Halloween and the night of the Spring Equinox. The old stone church was torn down in 2002.

The rumors about the cemetery appeared in a November 1974 issue of The University Daily Kansan (the student newspaper of the University of Kansas). Students likely circulated the rumors from there and the urban legend isn’t actually founded on anything.

Those caught trespassing into the cemetery at night will likely be caught and either fined or put in jail, or both. Patrols increase around Halloween and spring.

The Folly Theater and adjacent Edward Hotel were the center of Kansas City’s theater world for decades. The Folly stage hosted vaudeville and burlesque acts like Gypsy Rose Lee.

Restored to its original state — employees and visitors alike report paranormal activity in and outside the theater. There are reports of a mysterious man in a bowler, believed to be the ghost of Joe Donegan. Others report seeing a woman in a long gown rushing toward the stage.

The Alexander Majors Home–a historic home located on State Line Road is one of the few surviving antebellum houses in Kansas City. Some have said it is haunted by a woman — Louisa Johnston. She spent the majority of her life trying to restore the home. She died at age 89 in the caretaker’s cottage. Upon her death in 1979, she willed the house to long-time friend, architect Terry Chapman.

The house’s design includes nine rooms and nine fireplaces for each room. There are 27 interior doors and 11 exterior doors — nearly every room has a door to an outside porch or balcony. The floors are virgin white pine—non-existent today.

The house served as both a family home and as the headquarters for Majors’ freighting company.

Some people call it the most haunted house in the Sunflower State. A doctor and his family once lived there. The physician operated his entire practice on the bottom floor of the house. His most famous patient, 6-year-old Sallie, is considered to be a spirit who never left there.

The ghost story goes something like this — the young girl came to the house seeking medical care for an upset stomach — she was diagnosed with appendicitis. But sadly, Sallie didn’t survive the operation.

Over the years, many have tried to make the house their home. In the early 1990s, a young couple and their child moved into it and reported strange occurrences throughout the house. 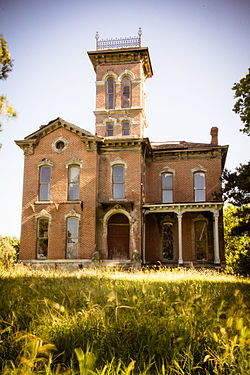 The rumors behind Sauer Castle are rather strange. One of those rumors goes like this: fires would randomly break out in the house and a man living there was the regular target of  sinister attacks, leaving his abdomen and chest covered in scratches. But a wife and a child there at the same time were never harmed.

Sauer Castle is now a private residence, the 18th-century, German Gothic mansion was built by Anton Phillip Sauer. He relocated from New York City by way of Vienna after his wife passed away in 1868. Sauer lived there with his five daughters and soon remarried a young widow with children of her own. Sauer himself passed in 1879, but the Sauers and their descendants lived there until the mid-1980s.

Not much is known about the hauntings that go with the house.  Regular reports include lights appearing in the watchtower, along with apparitions of both a woman and a boy standing in front of the property’s windows.

Daughter Eve Maria Sauer married William C. Van Fossen in the house, having one child named Helen before the marriage failed a year and a half later. She then married a widower with six children of his own, local Wyandotte County businessman and landowner, Mr. John S. Perkins. Together they had three children and stayed married — until he committed suicide with a handgun at age 73. One of Eve’s infant daughters drowned in the swimming pool on the west side of the house. Eve continued to live in the house till her death in 1955.

Paul Berry, bought the house after Eve’s death. He lived in the mansion until his own death in December 1986. Because of repeated ghost stories, lore, and rumors — the house has been constantly trespassed and vandalized. During Barry’s reign, he and his dog fought off vandals themselves.

The impressive estate maintains a reputation as one of the preeminent history destinations in Kansas City. The home is preserved for guests to visit year-round; some say spirits have haunted the residence for several decades.

The Valie Mansion was built in 1881 by married couple Harvey and Sophia Vaile. Tragedy struck the family two years later. Sophia, who had been diagnosed with stomach cancer, was found dead at home due to a morphine overdose. Harvey was away on business. He never remarried and died in 1895. There are rumors that Sophia’s ghost wanders throughout the house, including peering out the mansion’s windows.